Tbilisi, the ancient capital city of Georgia, is a place that has witnessed numerous changes over the millennia. Its unique position, centred in the landmass that separates the Caspian Sea to the east and the Black Sea to the west, has exposed it to a series of invasions throughout its long history.

Archaeological evidence proves a continuous line of human occupation in Tbilisi stretching back to the palaeolithic era. This history has not always been settled and peaceful, with battles, rebellions, riots, and massacres. Countless generations have come and gone, leaving their influences in a number of ways, such as in the architecture. The people of this fascinating city treasure their home and are fiercely proud of it. They enjoy their heritage and are happy to share it. And while they value the historical architecture around them, they are unafraid to embrace the new.

One example of this can be found in the heart of Tbilisi, and it is known as ‘The Bridge of Peace’.

The design of this unique structure was entrusted to Italian architect and designer Michele De Lucchi, who had impressed the Georgian government with his previous designs. The two buildings he produced, the Ministry of Internal Affairs, and the Presidential Administration of Georgia, couldn’t be more different in appearance. The former is modernistic, curvaceous, organic, while the latter is grand and fairly traditional, fronted with columns and a glass dome. De Lucchi’s idea for the bridge, however, purposely mirrors the design of the MIA building in its sinuous curves.

French lighting designer Philippe Martinaud collaborated with De Lucchi to bring the structure alive by installing an elaborate array of illuminations. These bring visitors – tourists and natives alike – flocking to the bridge at night to witness the spectacular sight.

Many of the intricate parts, including the lights and glass, are of Dutch and German origin.

Why is it called The Bridge of Peace?

Considering Georgia’s troubled past, and Tbilisi’s own turbulent history, naming a monument this way seems appropriate. And that is what this structure is; a monument. The administration could have opted for a simple bridge. After all, all they required was a footbridge to cross the river. But they chose to invest in something that made a statement.

The architect himself said of his design:

“A bridge is a structure that joins two points, allowing people to get over an obstacle,and it is also a highly symbolic form of architecture in that it can be an emblem of dialogue between two opposite and divided positions”

The divided positions, in this case, were the ‘Old Town’ and the new neighbourhoods and the area where Rike Park is situated, separated by the Kura (or Mktvari) river. So, the footbridge was installed to join the old to the new, a link from the past to the present. It could be viewed as a symbolic connection of the tempestuous days of history (and even recent history), to the present, more settled days. Hence, the Bridge of Peace.

Some fascinating facts about the Bridge of Peace

Not all Georgians were happy with the bridge, however. They view it as being too modern, imposing itself on the banks of the Old Town, and clashing with the heritage buildings situated there. The unusual shape has drawn ridicule in some quarters, earning it the name of the ‘Always Ultra’ bridge, for obvious reasons.

These criticisms apart, the Bridge of Peace is a remarkable feat of engineering and design, drawing thousands of visitors daily. It is, without doubt, a success, performing its task as both a functional, time-saving access route across the river, as well as being a piece of contemporary design that is a monument in itself. And Tbilisi is all the richer for it. For more interesting articles about Georgia, check out our article on the Narikala fortress, which is viewable from the bridge. 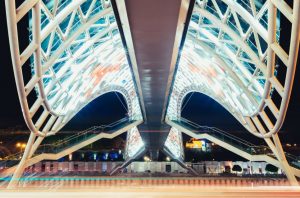 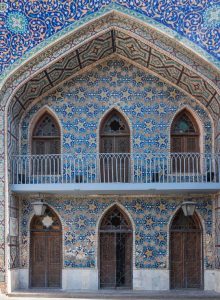